A recent report shows marriage rates dropping dramatically, specifically among those 18-34. Average age to get married is now 29 years old. A few initial thoughts: not everyone is called to be married. I get that. I also understand that the delay is getting married is accompanied by great things, like a more educated general public and good talent in the workforce. 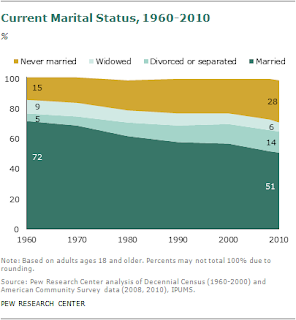 Soon, those who are married will be in the minority. People have made the case that of the 51% who are married, some of those simply can't afford to get a divorce so they keep their marital status. 39% of those polled believe that marriage is becoming obsolete. All of this leaves my heart a little unsettled.

How can a sacred marriage be protected in a society that doesn't value monogamy? In a society that teaches us to do what is best for ourselves, to respond to our every emotion and that the grass is always greener on the other side? It's a little scary!

I was recently involved in a conversation that essentially boiled down to the fact {from the other person's point of view} that I couldn't possibly be happy because I don't have a child. It was an odd conversation to say the least. I value this person's friendship, but this was way off base. Afterwards it got me thinking and finding comfort in the fact that God assured Sean would be enough for me {meeting my earthly needs and challenging me spiritually, that is. There are certainly holes in my heart only God can fill}. Although I do hope to have a family, no one is guaranteed that blessing and I really do believe that if it were just Sean and I we would be legitimately happy living God's will for our lives that might look different that others around us.

Marriage is tough. It brings extreme joy and also unmet expectations. I can't image a marriage without God -- two sinful people trying to make it work on their own seems extra difficult to me. A cord of three strands is sometimes the only way Sean and I have gotten through a disagreement or challenging week.

I hope that in the midst of declining marriage rates and climbing divorce rates I will take a more active role in praying for and supporting my own marriage as well as the marriages of my friends around me. I think I will brainstorm ideas of how to do this and write another post soon. Any ideas?
In His love, Sean and Nicole at 8:41 AM 1 comment: 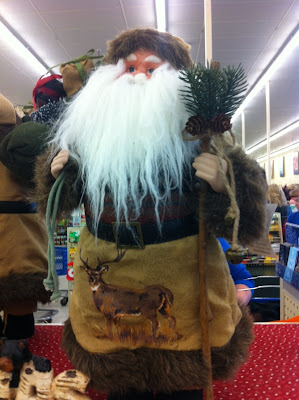 I get that this is woodland Santa, but I think the painting of a buck on his dress garment is a little obvious. What, you don't own a skirt with a buck on it?

Jen Hatmaker, a wonderful writer and woman of God has this great blog. I linked to one of her posts a few weeks ago on adoption and encourage you to check that out when you have time.

This blog post is on Christmas and how out of whack it has become. She talks about how her family is trying to combat the selfishness that arises during what is supposed to be a sacrificial, giving holiday. Things like watching less TV so they don't have to deal with the extra advertising, buying fewer gifts and giving her kids money to spend on projects around the world.

I appreciate her honest approach and understanding that not everyone will agree and choose to do what she does. I can relate to her feeling that during the month of December people feel off-kilter -- they want to be kind and giving, but there are feelings of obligation and selfishness that seem to always creep in.

This year was probably the first I've given much thought to it. For the past couple of years I have cut back on gifts, but mostly due to a smaller budget and not necessarily to be conscious about celebrating the birth of our Savior instead of the commercialized version of Christmas. My trip to Haiti, and subsequent changes in how I look at things and deal with money had me feeling all weird when my mom requested a wish list for Christmas. The sad thing? It didn't stop me from asking for a laundry list of things I don't need. Sure, I hesitated, but I still submitted the list.

Thinking of family Christmas traditions is a little weird right now because we don't have kids. But really, what better time to change your mentality on the holiday? How could I really expect to teach my {not yet existent} children about how important Jesus' birth was to all humanity if I myself get caught up in the buying of presents, parties and decorating the home? None of those are bad by themselves, but apart from teaching the significance of Christmas they are dangerous.

I just finished the book Radical by David Platt and it's totally worth the read! It's full of good stuff, but the overall premise of the book is that the American dream (big home, good job, lots of money) often falls counter intuitive to what Jesus actually asks of his followers. Living the way our culture says is correct can be a huge obstacle to living out our faith and loving others the way the Bible commands us to. 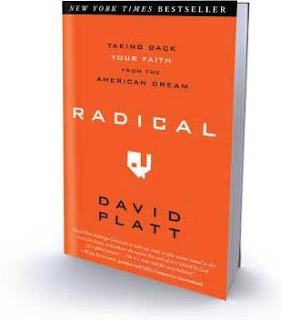 I will admit that the book starts off as a bit of a downer, but mostly because it was really convicting for me. It highlights a lot of the author's concerns with modern American churches. For example, he asks the question that if the entertainment factor were taken away from church (music, comfy chair, nice facilities) would we still go? Is Jesus enough for us? David Platt is a pastor of a large church in Birmingham, so I enjoyed struggling through some of the concepts with him. He tells of teaching at a secret church in Asia one week then be back in his comfortable, rich church the next and he's had a hard time reconciling those - that comes across in this book and was very genuine to me.

The book discusses topics like what we do with our money and how that may or may not help us on our walk with Christ. It introduces ideas of how to improve our world-view and care for orphans and those in need around the world.

The book ends with a challenge to do something about it. Not just read the book, but take it an put it into action. And by book I mean both the Bible and some concepts Platt introduces in Radical as well.

If you haven't read it, I would add it to your list. It's a short book that's jam packed with thought provoking material. Did you already read it? I'd love to hear what you think. Did you change anything in your lifestyle after finishing?

One thing I'm doing is asking for the book Operation World for Christmas. It's a book that takes you through countries all over the world and highlight specific needs they might have. If you finished it as planned, you will have prayed every nation in the world in one year!

I just really like my dog. Look how cute he was as a puppy! He's a really happy dog and does a good job being my friend and constant heat pack. He prefers for Sean to play with him (because he can throw his Kong further), but for sure prefers to snuggle with me. 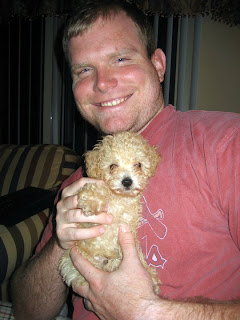 Here he is snuggling in a blanket after his bath and using my face as a pillow. He didn't think it was weird at all.﻿ 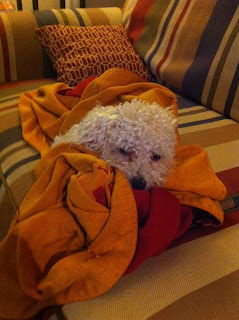 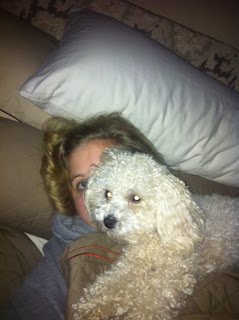 This is his best friend, Colonel. They live across the street from each other, go to each other's doors and stare at each other through the window. They are pretty rowdy together, but I think it's cute that they are friends. We won't be getting a second dog anytime soon, though.﻿ There are a couple of things he does that are not so cute: he plays fetch all the time. It's a good skill, but if we don't want to play he will whine for a while. He's starting to learn better, though. He will also chew holes in all pairs of underwear or pants within his reach. I've learned the hard way to not throw my pants on the floor! 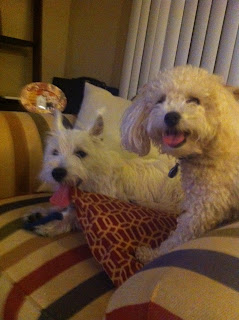 I think he's extra cute near a Christmas tree. Here are this year's Christmas portraits. Doesn't this one look like a school picture? Hands crossed, head slightly tiled. hehe 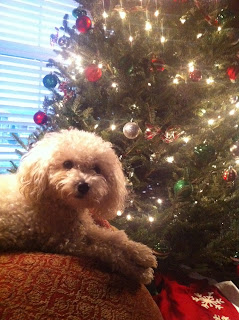 He likes to hang underneath the Christmas tree and I think it's cute. 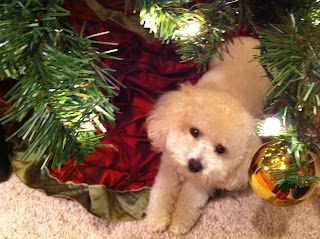 He went to the groomer this weekend, which seems to be a bit traumatic for him, but the guy does a good job. This groomer always points out that he needs to be groomed when I bring him in. I know. That's why I brought him in. 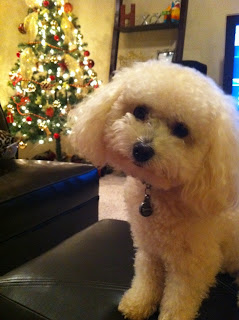 While I'm excited to be a mom someday, right now I'm really enjoying the quality time with Sean and this sweet little pup. :)
In His love, Sean and Nicole at 1:10 PM 1 comment:

A disproportionate number of our friends here in NWA work at Acumen Brands. It's a really cool company that develops online retailers, like the Baby Habit, The Hectic Gourmet and Trails Edge.

This weekend they are having a warehouse sale that's going to have some mega sales here in Fayetteville. Here's a link to the Facebook event that shows all of the details. If you're in the area you should swing by and check it out. If not, you could always shop online. :)

Sean and Nicole
We are highschool sweethearts who have been married since March of 2008. I love to multitask, and so does this blog. Here I share with you everything from my most recent sewing project to what I'm learning from God. Please join me as I try and figure out what it means to be a wife, daughter, crafter, sewer, friend, and follower of Christ.

Find what you're looking for

Check out my Etsy store!

Thanks for featuring my blog!